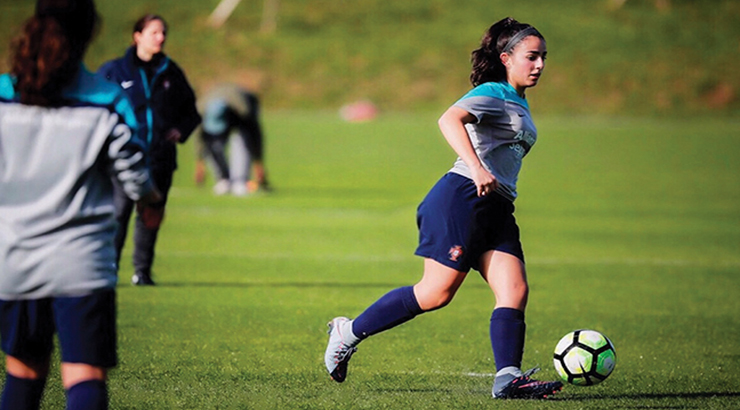 An interview with Dan Kelly

D: How are you eligible to play for Portugal?

V: Both of my parents are Portuguese and I have dual citizenship.

D: How happy were you to tryout for Portugal, and how did it come about?

D: Can you speak Portuguese?

D: Were you the only person who lives in the USA trying out?

D: Besides the Shrub Oak Girls United, what other teams have you played for?

D: What position do you play?

V: Midfield and a little defense.

D: Tell me about the experience. What was the training like? How intense was it?

V: It was very productive. Before every practice, they would have a technical reunion. Here is where they would talk about what drills we would be doing, what teams we were on, and the goals of the  sessions. There was a lot planning in advance, which kept the session moving. It would go faster in stations. It was very intense.

V: What was really cool is that it took place at the Cidade de futebol (soccer city). This is where all Portuguese National Teams train. This is where Ronaldo trains! All of the national team trophies are there, and the memorabilia. My dad loved taking pictures with the trophies. On our last night, we stayed in the Pestana CR7 Hotel, and it’s Cristiano-themed layout. It was all very cool.

D: Is the coaching style similar to what you have experienced here? If not, explain how it is different?

V: The coaching was a lot more intense. Not assertive but much more tactical – showing all the options available – not just the best one or two. There were very high expectations. You were expected to have the technical skills, so only short times between drills were spent on technical. It was almost all tactical.

D: Can you tell me about the level of play? How were the players compared to your other teams?

V: All the players were very professional, very talented and highly skilled. They were all also very welcoming to me, and helped me with language problems if I didn’t understand something.

D: How were the coaches?

V: They were very understanding that the way we play in the US is different. So they were patient and explained things to me in Perfect English if I didn’t know what they were trying to do.

V: There was so much going on. We had heart and breathing monitors strapped on us during all training  sessions, we had nurses before and after every session, nutrition people watching everything we ate. We had laundry people, and drivers – we used the National Team bus. It was all very catered to the player. I can see how Ronaldo can get spoiled! I felt bad for the laundry people.

D: I know there wasn’t a lot of down time, but were you able to interact with the other players off hours? What was that like?

V: We had a very strict schedule. We did have scheduled free time to hang out and other scheduled time for school work. I became such good friends with the girls. A week later, and we are always  texting, on snapchat together, and still sharing our experiences.

D: How about the food, and culture? Were you able to explore a little? If so, tell me about it.

V: Well the food was different – much more organic and healthy and some things much tastier. There was a lot of fruit, and no fries, and they made sure you eat to keep up energy, but you had to eat right – they would even monitor if you tried to eat extra cake!

V: Overall it was a cool experience. We did have some time to see family and sightseeing. It will be hard to keep up with the team since they train year-round, but I would love to train and play with them again. I am here and 8 hours away by plane.

Veronica Lage has been playing soccer since she was 4 years old, and a member of the Shrub Oak Girls United team since she was 10. As a sophomore at Lakeland High School, she started 13 games in defense or midfield, scored her first Varsity goal this past season, and was awarded most improved player by the coaching staff.