Our Academy program is focused on developing the next generation of soccer players by providing them with the tools and skills enabling them to advance and be competitive at the State, Regional, and National Level.

The program is designed to supplement all club activities permitting the committed soccer player to gain exposure to a higher level of training than the player would typically receive in their club team. All of the teams make every effort to avoid conflicts with Club and/or League activities.

PLAYER DEVELOPMENT and good sportsmanship are the primary goals of our program. 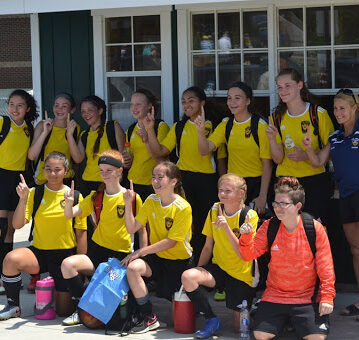 The Academy Program is open to all current registered EHYSL players in good standing.

Teams will be organized as early as possible in the Fall season. Initially the program will concentrate on the U10-U14 age groups (Boys and Girls) with tryouts for the U15-U17 age groups later in the fall after High School season.

such as a tournament. Players are competing for playing time which raises everyone's level of play and makes attendance at Academy activities more meaningful. Every player will participate in at least 2 tournament events.

All teams will carry the same name: East Hudson Academy

Payment for the Academy program can be made over three installments. 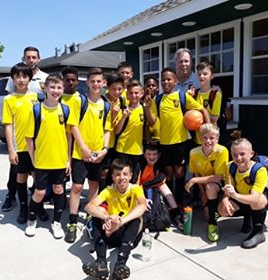 Once selected for the program, players will be expected to participate in all program activities as well as their respective club activities.

Indoor training sessions will be scheduled beginning in January the Hudson Valley Sports Dome. Outdoor training sessions will be scheduled beginning in April at the Hudson Valley Sports Dome.  Tournament play will be in the late Spring and Summer with four events. Conflicts with Club/ League/ State Cup play are to be avoided. U15-U17 teams may attend college showcase type tournaments so our players can begin to get recognized by college coaches. For additional information about this program please contact the East Hudson Academy Director Robert Matragrano.

Anyone interested in coaching an East Hudson Academy Team is asked to send their resume to soccer@ehysl.org.

What is the East Hudson Academy?

The East Hudson Academy is a developmental and supplemental program for the youth soccer members of the league. It is developmental in that its purpose is to further develop each player so they may return to their respective club team with improved skills with which they can raise the level of play with their teammates. It is supplemental as it adds to each player's club experience without having to leave their club team.

When and where are training sessions held?

Indoor and Outdoor training sessions will be held weekly at the Hudson Valley Sports Dome.

All teams will attend at least two outdoor tournaments.  Depending on roster size and player availability teams may participate in additional tournaments (the cost of additional tournaments is not included in the fee). We hope this will foster a sense of unity within the program and collaboration among the coaches. It will allow for schedule planning and minimize travel for families with children on different Academy teams.

Tournaments attended the past few years have included:

What sort of commitment is required?

Once selected to an Academy team, all players are expected to make the Academy their top soccer priority outside of their EHYSL club team commitments. You are excused from attendance during the EHYSL League schedule dates to attend EHYSL club teams games and tournaments.

These are the only exceptions. Players playing State ODP can play with the Academy teams as the tournament schedules do not usually conflict and credit will be issued for practices missed due to ODP participation.

How big is the roster?

Teams will be formed with rosters of approximately 20 players. Most tournaments limit roster size to 18 players so players will be competing for playing time as well as number of tournaments they will attend. This competition generally raises all players' level of play and makes attendance at all training sessions more meaningful.

All of our Academy Head Coaches possess at a minimum a National USSF license or NSCAA National Diploma. Many are college and high school coaches and have considerable playing and/or coaching experience as well.

How much is it to participate in the Academy?

The Academy cost for full season teams (U10 - U14) will be $800 plus uniform cost. The cost for the U15 and older teams is $800 plus uniform cost. This fee covers outdoor training costs as well as all registration and tournament entry fees. The uniform fee will be approximately $120 and includes two jerseys, shorts, and two pairs of socks. We divide our Academy fee into three payments so as to reduce any financial burden at one time. This year, payment can be made by either check, money order, or credit card.

How will I know if I've been admitted to the Academy?

All players will be notified by email as to the outcome of tryouts. If you are selected to a team, you are asked to respond accepting the position on the team. A team meeting will be scheduled, and practice schedules will be forth coming.

If you have any questions that were not covered here, please feel free to speak with any of the Academy Staff at tryouts or email Robert Matragrano, Academy Director.